A Moveable Feast is a memoir from a young Ernest Hemingway’s pen. 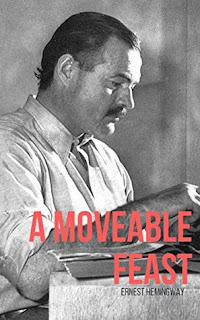 It was recommended to me by an online writer’s masterclass I attended in January 2020. I need to add that I have never read any of Mr Hemingway’s books though I know him through the many quotes that frequent the writer’s world. I have learned to have respect for what he had achieved and the legacy he had left behind. So, I went in with great expectation but… there is always a but, correct.
My expectation quickly turned to confusion. Since I had done the writer’s masterclass in January, I cannot remember why it was recommended. It could be that we talked about memoirs and how to write it…
Maybe it has to do with the time difference, though I love a beautifully written historical. So, it cannot be the reason. On the plus side, Paris became alive through his telling and though he considered himself poor his life was not poor. Just imagine sitting at a café while you enjoy a glass of wine with equally skilled writers and poets; it would be a dream come true. Today we don’t have the privilege to mix with other writers like he did.
With that said, here are the things I didn’t like.
Too clunky, too many sticky words and too long sentences. Writing from then to now definitely had changed.
Then all the throat clearing. Pages of dialogue-soaked throat-clearing that you skip just to get to what he tries to say. In the end, I stopped with the book and thought if he could write and become famous, I can as well.
Did my respect for the older writers diminish? No, it didn’t. If not for them we would not have the writer’s community, we have today. They laid the foundation for us and for that they deserve our admiration.
The book will leave you with a mixture of admiration, awe, and confusion but it is still worth the time. Even if just for what you can learn from it.

“Ezra was the most generous writer I have ever known and the most disinterested. He helped poets, painters, sculptors and prose writers that he believed in and he would help anyone whether he believed in them or not if they were in trouble. He worried about everyone and in the time when I first knew him he was most worried about T. S. Eliot who, Ezra told me, had to work in a bank in London and so had insufficient time and bad hours to function as a poet.”
Hemingway, Ernest. A Moveable Feast

Excerpt A Strange Enough Ending
The way it ended with Gertrude Stein was strange enough. We had become very good friends and I had done a number of practical things for her such as getting her long book started as a serial with Ford and helping type the manuscript and reading her proof and we were getting to be better friends than I could ever wish to be. There is not much future in men being friends with great women although it can be pleasant enough before it gets better or worse, and there is usually even less future with truly ambitious women writers. One time when I gave the excuse for not having stopped in at 27 rue de Fleurus for some time that I did not know whether Miss Stein would be at home, she said, “But Hemingway, you have the run of the place. Don’t you know that? I mean it truly. Come in any time and the maidservant”—she used her name but I have forgotten it—“will look after you and you must make yourself at home until I come.” I did not abuse this but sometimes I would stop in and the maidservant would give me a drink and I would look at the pictures and if Miss Stein did not turn up I would thank the maidservant and leave a message and go away. Miss Stein and a companion were getting ready to go south in Miss Stein’s car and on this day Miss Stein had asked me to come by in the forenoon to say good-by. She had asked us to come and visit, Hadley and I staying at an hotel, but Hadley and I had other plans and other places where we wanted to go. Naturally you say nothing about this, but you can still hope to go and then it is impossible. I knew a little about the system of not visiting people. I had to learn it. Much later Picasso told me that he always promised the rich to come when they asked him because it made them so happy and then something would happen and he would be unable to appear. But that had nothing to do with Miss Stein and he said it about other people.
It was a lovely spring day and I walked down from the Place de l’Observatoire through the little Luxembourg. The horse-chestnut trees were in blossom and there were many children playing on the graveled walks with their nurses sitting on the benches, and I saw wood pigeons in the trees and heard others that I could not see. The maidservant opened the door before I rang and told me to come in and to wait. Miss Stein would be down at any moment. It was before noon but the maidservant poured me a glass of eau-de-vie, put it in my hand and winked happily. The colorless alcohol felt good on my tongue and it was still in my mouth when I heard someone speaking to Miss Stein as I had never heard one person speak to another; never, anywhere, ever. Then Miss Stein’s voice came pleading and begging, saying, “Don’t, pussy. Don’t. Don’t, please don’t. I’ll do anything, pussy, but please don’t do it. Please don’t. Please don’t, pussy.” I swallowed the drink and put the glass down on the table and started for the door. The maidservant shook her finger at me and whispered, “Don’t go. She’ll be right down.” “I have to go,” I said and tried not to hear any more as I left but it was still going on and the only way I could not hear it was to be gone. It was bad to hear and the answers were worse. In the courtyard I said to the maidservant, “Please say I came to the courtyard and met you. That I could not wait because a friend is sick. Say bon voyage for me. I will write.” “C’est entendu, Monsieur. What a shame you cannot wait.” “Yes,” I said. “What a shame.” That was the way it finished for me, stupidly enough, although I still did the small jobs, made the necessary appearances, brought people that were asked for and waited dismissal with most of the other men friends when that epoch came and the new friends moved in. It was sad to see new worthless pictures hung in with the great pictures but it made no difference any more. Not to me it didn’t. She quarreled with nearly all of us that were fond of her except Juan Gris and she couldn’t quarrel with him because he was dead. I am not sure that he would have cared because he was past caring and it showed in his paintings. Finally she even quarreled with the new friends but none of us followed it any more. She got to look like a Roman emperor and that was fine if you liked your women to look like Roman emperors. But Picasso had painted her, and I could remember her when she looked like a woman from Friuli. In the end everyone, or not quite everyone, made friends again in order not to be stuffy or righteous. I did too. But I could never make friends again truly, neither in my heart nor in my head. When you cannot make friends any more in your head is the worst. But it was more complicated than that.
Hemingway, Ernest. A Moveable Feast