A Collateral Attraction by Liz Madrid. Book 1 in the Fire and Ice Series. 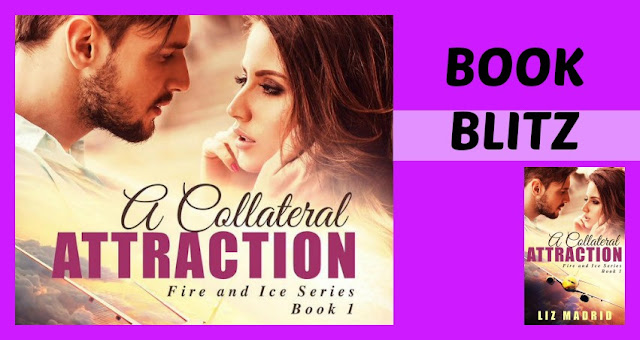 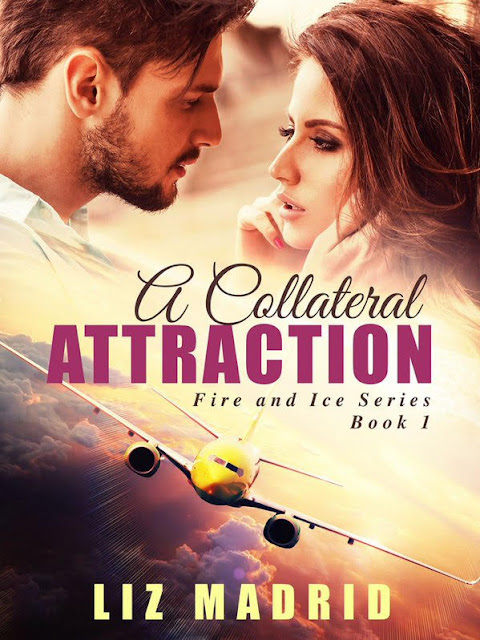 SYNOPSIS:
Billie Delphine has always been content standing in the sidelines while her identical twin sister, Blythe, gets all the attention, including a glamorous lifestyle with billionaire, Ethan Kheiron, who will do anything to wrestle back control of the family fortune from his younger brother, Heath.
But when Blythe disappears with Ethan while Billie is visiting her in New York, the last thing Billie wants is to be mistaken for her sister — or be falsely accused of a crime that Billie knows Blythe did not commit.  So when Heath suggests they work together to find them, Billie agrees.
But a life of luxury cannot hide the years of unresolved differences between sisters, nor the decades of lies that have left the Kheiron family divided. And even as Billie slowly falls for Heath, she knows that until they all settle their differences, they're just pawns on someone else's game of power — where some of them are more expendable than others.

A Collateral Attraction was first titled Collateral when it was being serialized on Wattpad as one of the entries for Harlequin’s So You Think You Can Write competition, and RT Book Reviews featured it as one of the top 5 romances to read for July 2015. 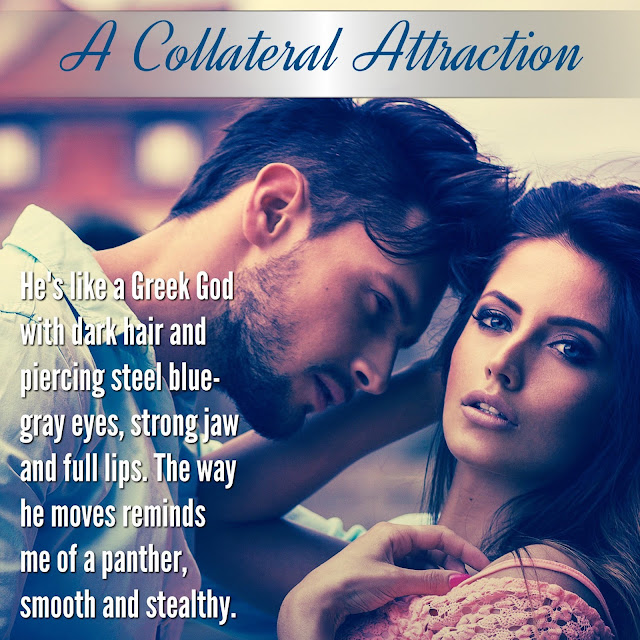 While Blythe is in the back room having her dress fitted to her measurements, I’m enjoying my second glass of wine when the front doors burst open, and a man strides in. He’s dressed in an immaculately tailored suit that can’t hide a broad chest and slim waist, his long strides emphasizing muscled thighs and long legs. He’s like a Greek god with dark hair and piercing steel blue-gray eyes, a strong jaw and full lips, and the way he moves reminds me of a panther, smooth and stealthy.  The wine has probably made me act bolder than I usually am, though when his gaze sweeps across the room and our eyes meet, my confidence falters. I look down into my glass, suddenly wishing I’m invisible, not that it helps, for he’s seen me and now he’s striding purposefully towards me. One of the employees, a young woman with a pixie hair cut that reminds me of Twiggy, meets him halfway. "May I help you, sir?”
“I’m here to speak to her,” he says, pointing his finger at me. I look up at him, startled. Me?
Do I know him? I struggle to remember if I’ve seen him before, maybe someone Blythe introduced me to sometime between my arrival and right now, but I come up empty.
“I’m sorry, sir, but we’re in the middle of a private event, and I’ll have to ask you to leave,” the young woman says, and just like that, I swear the temperature in the room turns cold as his gaze sweeps along the length of her.
“Obviously you’re new. Do you know who I am?" Before she can answer, Alicia appears next to her, smiling sweetly.
“Mister Kheiron! I didn’t expect to see you here today.”
"Alicia, how are you?”
“I’m well, thank you for asking. I sincerely apologize for this young lady’s manners. Amelie is new, you see, and isn’t yet familiar with our regular clients. In fact, Blythe recommended her, “Alicia says, before turning to face the young woman, who’s just turned white as sheet. ”
"Shouldn’t you be stocking inventory?"
As Amelie scurries to the back room, the man walks past Alicia and continues to make his way towards me. I set my wine glass on the coffee table and stand up. Based on mean he is, this must be the infamous Heath Kheiron. Then I wonder if we’ve overcharged the Gold Card by mistake.  As he stops in front of me, I smell his cologne and my nostrils flare, the hairs at the back of my arms standing on end. Even my belly tightens. Citrusy with a hint of spice.
“Where is he?” he asks, his voice cold and deep. I glance around, as if confirming that he is talking to me.
“Who?”
“Don’t ’who’ me,” he says through gritted teeth as he draws closer.
“Where is Ethan?”
“I don’t know,” I stammer, confused and not understanding his anger.
“We’re meeting him for dinner-“
“When you see him, tell him to call me,” he says just as the realization hits me.
He thinks I’m Blythe! “No, wait! You’re wrong! I’m not Blythe! I’m-”
“Yeah, right,” he scoffs, grabbing my wrist, and this time his voice lowers as he addresses me.
"Tell Ethan to give back what he stole, or I’m making sure that everything will be taken away from him — his spending accounts, his access to company properties,” he pauses, lifting an eyebrow as he looks at me.
“Even you, Blythe.”  The way he looks at me makes me wither inside. It’s cold and demoralizing, like he’s appraised me from behind his blue-gray eyes and I came up short.
“For your information, mister,” I say as I yank my wrist away from him, “I am not a thing.” Heath eyes me, as if surprised that I actually can speak, and then he chuckles, as if I just said something funny.
"You’re not a thing, is that it? You’re not this thing for my brother to dress up and primp like some doll on display — like he’s doing now?”
He bites his lower lip, and shakes his head, as if he’s the one who’s perplexed. But clearly, by the words that follow, he’s not. "It’s time to wake up and smell the roses, dear Blythe, because as far as I’m concerned, that’s exactly what you are to me — a thing. Now where is Ethan?”
This time, I’m too shocked to say anything back, but Alicia comes to my rescue. “I need you to leave, Mister Kheiron. This behavior is inexcusable.”
“Don’t worry. I’m done here, Alicia," Heath says before turning his attention back to me.
"Tell Ethan he’s got till tomorrow to explain himself, or he’s going to end up with a bigger problem in his hands — and I believe you know what I’m talking about, Blythe. And tell him that once I notify the board of what’s been happening, he’ll have nothing to his name — nothing. Neither will you.”
“Mister Kheiron!" Alicia’s voice is shrill now and two men in dark suits seem to magically appear next to her.
“Good day, Alicia,” Heath says, nodding his head curtly, before turning to address me, the bow of his head mocking me.
“And you, too, Blythe. Enjoy your shopping spree.”  I can’t even say anything back at him, not when the way he looks at me decimates me into someone who clearly is not worth anything in his eyes. I feel Alicia’s hand rest on my arm as Heath turns away and walks out of the store.  “I’m so sorry, dear,” Alicia says.
“Are you alright?” I nod.
“I guess when tycoons have a bad day, they really do have a bad day, don’t they?"