5 Star Review for The Dogon Initiative by Lance & James Morcan 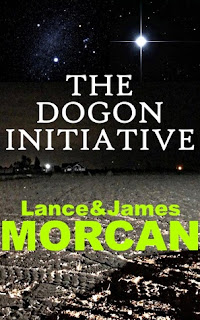 A group of foreign mercenaries hired as deniable assets by a newly-formed humanitarian division of the CIA is tasked with saving Mali’s persecuted Dogon people from genocide. The operation must be carried out in stealth while journeying across some of West Africa’s most hostile terrain. As if all that’s not enough, they are also instructed to help solve an ancient astronomical mystery linked to the pyramids of Egypt.
Mission impossible? Duh!Nicknamed the Deniables because their existence isn’t officially acknowledged by the CIA, the mercenaries are crazy enough to accept the mission anyway. However, they soon find themselves fighting for their lives when they get caught in the middle of warring ethnic factions in Mali. Their only way to survive is to join with the Dogon in a race against the clock. The stakes are so high that not only could an entire indigenous group be wiped off the face of the Earth, but all evidence that supports advanced ancient technology theories surrounding the Dogon and a lost civilization thesis may be destroyed in the process.Inspired by a true-life mystery of astronomy, THE DOGON INITIATIVE highlights some of the many myths and theories surrounding the fascinating Dogon people of Mali. In particular, their unexplained knowledge of the invisible-to-the-eye Sirius B white dwarf star, the rings of Saturn and other heavenly bodies, and their rumored ancestral relationship to ancient Egyptians.THE DOGON INITIATIVE is the ninth novel by father-and-son writing team Lance and James Morcan. Their previous works of fiction include the bestselling historical epics White Spirit and Into the Americas, as well as their modern thrillers Silent Fear and The Orphan Trilogy.

I received the book from the authors for an honest review and was in no way compensated.

The Morcan team once again brought a very realistic story to the forefront in the book, The Dogon Initiative.
The Dogon people of Mali is believed to have knowledge of Stars not known to man. This knowledge was passed from father to son for ages. One boy, believed to be the next great leader fled the country during an attack on his village.
Now, years later, a CIA team believed these people need to be reunited with their leader for the world to know their secrets. There was just one problem. The Dogon people were feared by many in Mali. A few higher up governmental officials wanted them vanquished once and for all. Their task was to stop that union from happening.
When 10 black ops people are asked to protect the leader to be reunited with his people the "fun" started. The team consisted of very interesting members, each very skilled in their field of interest.
It is a very quick read with enough actions to keep you at the edge of your chair, the entire time. The authors descriptive writing mesmerizing at all times as you the team in their quest.
Each character within the book had a significant role to play; doing so effectively. It enhanced the storyline extremely well.
The book captured all topics of greed, power and survival as the team, called the Deniables rushed through the African landscape, in order to save this leader. Their bravery and determination the highlight of the book.
It is a great book that I can recommend. It is fast paced and witty with enough tension to keep you guessing. Thanks for the opportunity to read this book.