Read an excerpt from Save me by Margaret Watson, book 7 in the Donovan Family. 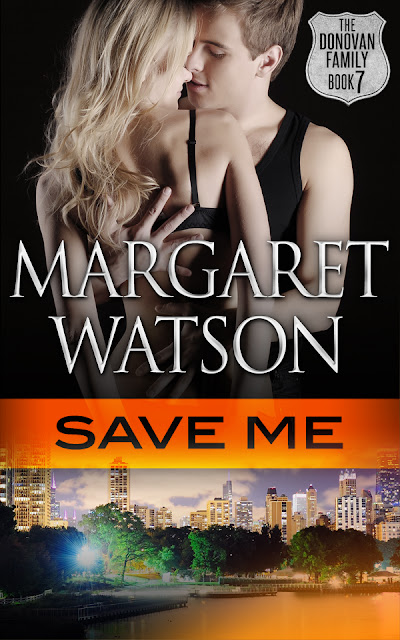 
She'd check with them tomorrow to see if Ward had visited Bates. 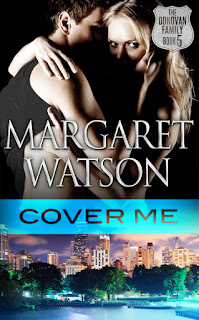 Blurb for Cover Me
Chicago cop Brendan Donovan loves the adrenaline rush of his role on a tactical team. So when he's assigned to an undercover job to ferret out the supplier of a new and deadly sex drug, he's thrilled. His partner is Cilla Marini, a detective he'd met recently during a traffic stop. He's intrigued by Cilla, but his sister told him that Cilla doesn't date cops. Which is exactly what they have to pretend to do. Brendan loves a challenge. Cilla is shocked to find out that Brendan is her mystery partner. After an incident that forced her to transfer from her district and isolated her from her fellow cops, Cilla knows relationships with cops are off the table. But she's spent far too much time thinking about Brendan since he pulled her over for speeding. Now, not only are they working together, they have to pose as a couple to find the source of the sex drug that's already killed several men. As the action heats up, Cilla and Brendan don't have to pretend they want each other. But when secrets put them both in danger, will they have each other's back? Or will their quarry divide and conquer them before they can find their way to happily ever after? 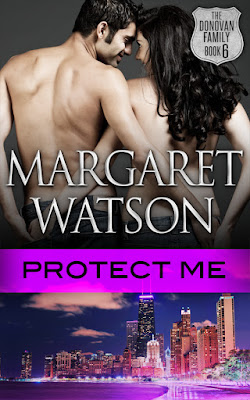 Blurb for Protect Me
olice officer Mia Donovan is studying for the detective's exam when her captain offers her an assignment – be Finn O'Rourke's personal bodyguard for the next three weeks. He's in town to film a movie, he has a stalker, and the threats are escalating. Mia isn't interested – she's focused on the looming exam. But her captain convinces her that successfully protecting Finn will look very good on her record when promotion decisions are made. So, reluctantly, she takes the assignment. Finn isn't the arrogant, egotistical actor Mia expected. There's more than meets the eye when it comes to the 'most hated man in America', Finn's nickname since he cheated on his girlfriend, a beloved pop star. But his stalker is lurking and the threat is escalating. Although Mia's feelings for Finn are growing, her job is to protect Finn, not fall in love with him.

Blurb for Save Me
State's Attorney Livvy Marini and Detective Ryan Ward have many reasons to dislike each other. Starting with Livvy's sister once arresting Ryan. But when Livvy's boss assigns her to interview Ryan about a case, they have to put aside their animosity and work together to keep Ryan's former partner in prison. Anson Bates is desperate to get out of jail. Livvy and Ryan unearth information that will destroy his chances for bail, but the more they uncover, the more risky their job becomes. Working to keep a dangerous criminal off the streets, Livvy and Ryan go from adversaries to friends. Then lovers. But when Livvy's life is threatened, can Ryan reach her in time to save her? And once she's safe, can he save himself? 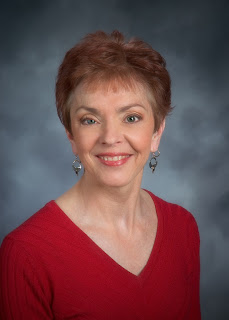 Bio
I love being a writer!  That moment when I get an idea and it begins to crystallize into a story is a burst of adrenaline like no other.  I've published thirty-seven books, and that lightning bolt at the beginning of each story never gets old.
After writing thirty books for Silhouette and Harlequin, I'm now writing a series about the Donovan family, siblings who are all in law enforcement in Chicago – four detectives and one FBI agent.  They're sexy romantic suspense, with a big helping of family.  I've finished all the siblings' books, but I can't bear to let the family go.  So I'm working on books featuring secondary characters from the first six books.
I've wanted to write since I was a child, but a love for animals and a fascination with medicine led me to become a veterinarian.  I love that career, as well, and my job has provided me with lots of inspiration for my books.
I live in a Chicago suburb with my husband and a variety of pets.  When I'm not working, we spend our time visiting our adult daughters, traveling and hanging out with our friends.

Email ThisBlogThis!Share to TwitterShare to FacebookShare to Pinterest
Labels: Cover me, Excerpt from book, Margaret Watson, Protect me, Save me, The Donovan Family book 7