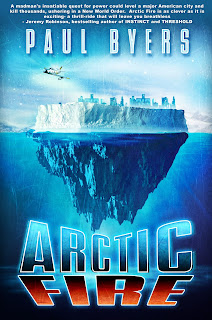 Wealthy entrepreneur Nigel Cain has devised an efficient new way to bring the earth’s most precious resource to the masses – clean water – by transporting massive man-made icebergs from the frigid arctic and delivering them literally to the doorsteps of millions.
Gabriel Pike works at a small engineering firm that has been awarded the task of giving the final safety approval to pilot the first gigantic block of ice into New York harbor.
A consummate showman, Cain has built a fabulous 5-Star hotel and casino high atop the iceberg so his celebrity guests and media elite can cover this spectacle from beginning to end. Pike is whisked away from his work-a-day world and dropped into the lap of luxury where he’s expected to simply rubber-stamp his inspection.
A brutal winter storms ravages the iceberg and exposes structural inconsistencies and hidden agendas that fill Pike with serious doubts about the true intentions of the project. But a grisly double homicide on the ice puts the inspections on the back burner and sends Pike’s life spiraling out of control when he’s accused of being the jealous murderer in a lover’s triangle.
But Pike soon discovers that there is far more at stake than just his life. He uncovers a conspiracy more heinous than anything he could have imagined – a plot that will level a city, change the political face of America, and whose shockwaves will be felt around the world. Fate rests in his hands – if he can survive long enough to take action...

Paul grew up in Oregon on the shores of the mighty and mysterious Columbia River, and spent endless hours daydreaming on the beach in front of his house, making up stories about the ships from exotic ports all over the world that steamed up the river – what secret cargo might they be carrying; did they harbor spies who were on dark and exciting missions?
Later in adult life, he moved to another mysterious and provocative city – Las Vegas, just outside the famous Nellis Air Force base. After work he would sit on his porch and watch the fighters take off and land, igniting his imagination with visions of secret missions and rich speculation about what could possibly be hidden at Area 51.
After moving back to his native Pacific Northwest, Paul worked for the Navy and took every opportunity he could to speak with veterans from WWII to the Gulf War, listening to them swap stories and relate the experiences of a lifetime.
So it is this combination of a passionate love of history, a vivid “what if” imagination, and a philosophy of life that boils down to the belief that – there are few things in life that a bigger hammer won’t fix – that led Paul to become a writer of exciting, fact-based action-thrillers. His greatest joy is leaving his readers wondering where the facts end and the fiction begins.


Since I was on bed rest for the past two weeks I was afraid that I would not have the time to read the book so I asked my husband if he was willing to give it a go, this is his thoughts.

I must add that he loved this book immensely, describing the story to me with flailing arms and huge eyes, with lively commentary and great detail from interesting scenes that impressed him.

I received this book from the author for an honest review.

Where do I start with a story like this? First of all, we are in the time of World War 1 on board a U boat with an iceberg on the top of the U-boat then all off a sudden things happened, and Titanic is on the scene now you wonder what is this story going to be about? Just another explanation of the Titanic’s maiden voyage, but surprises awaits for the reader as we are taken to the present time with 2 pilots in the air with another plane coming on the scene, and we met Pike a veteran pilot.
So this is where the story start to unfold and as we read on we met Cain and Beth. They have a significantly big project that our famous veteran pilot must help them with. He is actually a Structural Engineer, and Cain has build a large floating iceberg, and they need Pike to inspect the structure that is on its way to New York harbor. Well this is where all the drama and suspense unfolds on a moving iceberg.
I must say I was skeptic at first, but as the story line unfolds I was quiet surprised and intrigued to continue reading.
Slow starter but as all the building blocks comes together it gain momentum and becomes fast paced. Well written you are drawn into this world never knowing what to expect from page to page.
Well done Paul you have masterly crafted a good suspense as well as a very believable project in terms of the iceberg on the see floating. A very enjoyable read, thanks.

To all Authors and Readers: All books read and reviewed were received from Blog Tour Hosts as advertised, as well as Independent authors. I was in no way compensated for the reviews. It is my own opinion.